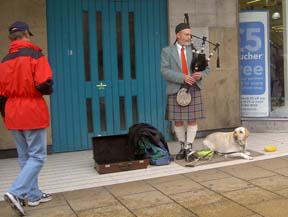 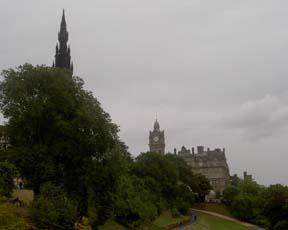 Visited Edinburgh Festival.
Wanted a "cheesy" photograph of an icionic Edinburgh view and one of a piper. During the Festival there appears to be a piper on every corner so I followed the sound of this one to Princes St and found it was a blind piper with his golden Labrador. Feeling very guilty and voyeuristic I threw some coins into his box and took this photograph. Was I right to do so? if he had been sighted I would not have hesitated.
This raises again all the moral dilemmas about photographing people in public.
Posted by Ann Shaw at 8:13 AM