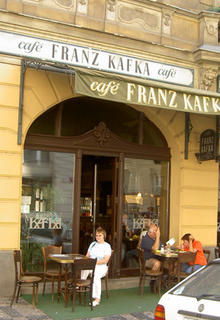 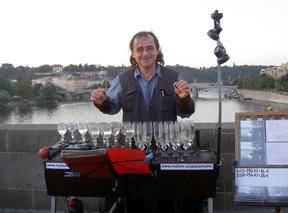 Having a few days in Prague. Stop off at the cafe used by Kafka, in the Jewish Quarter, and now named after him.

Walking along Charles bridge listen to an unusual rendering of Fur Elise- played on wine glasses.

They say the Sex Museum is the top tourist attraction in Prague and that the city is rivalling Amsterdam as the sex capital of Europe. In the night the city is heaving with hen and stag parties.

Having already been robbed on the underground in Chicago and Paris I was on the alert in Prague. Just as well cause I spotted that we had been targeted. Three men followed us on to the Metro then once they realised we were watching them they jumped off.

Discovered Black Theatre. The Wow! theatre group were opposite our hotel. Amazing!
(www.wow-show.com/wow/main.html)
Posted by Ann Shaw at 2:44 AM