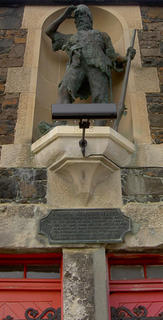 How's this for a bit of serendipity.
While driving along the Fife coast I pulled in at Lower Largo and stopped outside a house where Alexander Selkirk, the man who Daniel Defoe modelled Robinson Crusoe on, was born. Now they have this statue there to commemorate it.
Next day the newspapers are full of an international expedition who have found the actual campsite where Alexander Selkirk lived for four years on a remote Chilean island in the Juan Fernandez archipelago.
They found traces of Selkirk's camp with animal bones and holes that appeared to have housed poles for a shelter.
Posted by Ann Shaw at 3:20 PM