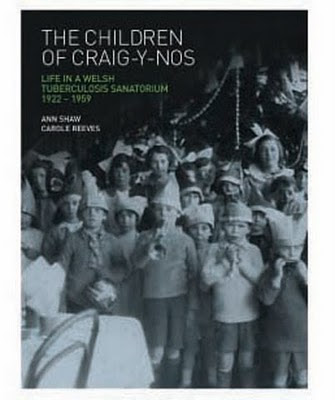 “ A powerful story told in words and pictures assembled from first-hand accounts…reveals shocking details of children’s lives in a Welsh TB hospital.”

That’s what the judges say about “Children of Craig-y-nos”.

Well, I guess I never thought of it in that light. To me who spent four years in Craig-y-nos as a child it seemed normal. I didn’t know anything else.

It is only now with a distance of more than 50 years I realise in writing this book, along with Carole Reeves, that it was far from normal.

There are five books short-listed for the Open Book Award and the winner will be announced on Tuesday evening at a special presentation to be held at the Wellcome Foundation.

The others on the shortlist ( General readership, category) include “Manufacturing Depression, the secret history of a modern disease” by Gary Greenberg, “An Infinity of things: how Sir Henry Wellcome collected the world” by Frances Larson and “Medic: saving lives – from Dunkirk to Afghanistan” by John Nichol and Tony Rennell.

So you see the field is very strong…the miracle is that we have even got as far as the short-list!

I will be travelling by train from Scotland to London tomorrow…
Posted by Ann Shaw at 4:34 AM