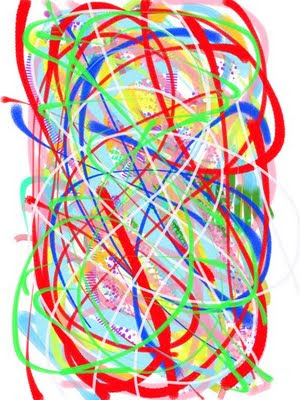 Ipad drawing made by sixteen year old Sarah Holliday - her first drawing on an ipad.
Impressive.

I had intended to keep a running blog on the Open Studios only it turned out to be too hectic. As soon as the studio closed there were special events and private viewings to go to plus Glasgow School of Art Degree show.

Well, the dust has now settled and it’s Monday. All the feedback is very good apart from a few hitches like council officials taking down our notices (seems it is illegal to put up notices on the road). This was a real pain for one artist because they had decided to close the main road leading to her studio for repairs and the only way she direct people to her studio – was to put up new directions.

I had a fraught couple of hours trying to sort that lot out.
Oh yes another complaint was over opening times. This is a real problem in rural areas where people might have driven a great distance to view work only to find that some of the studios in the area have decided to close that day. We did attempt to persuade artists to co-ordinate with their neighbours on this buy it didn’t work so I guess we have got to be a bit firmer next year.

On a personal level I am more than pleased with this years Open Studios because I made a conscious decision not to sell “stuff” and concentrate instead on giving people an experience and something to think about. It worked better than I expected but the downside was that at the end of each day I was totally shattered. Everyone stayed between 1-2 hours and some even came back with their families!

Most popular were the inter-activity sessions where people were given my ipad to draw on and I sent it on email to them so it was waiting when they got home. The teenagers who visited went straight to the electronics – no surprise there. As for my box, which became known as the “old age” box, this proved surprisingly popular too and led to many animated discussions. I asked people to write down on a small piece of paper what growing old meant to them. The only person who refused was a doctor!
Posted by Ann Shaw at 9:10 AM