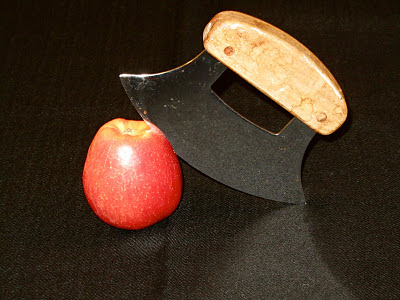 
Some time ago I was in a Glasgow ironmongers looking for a new kitchen knife when a group of young Glaswegian men came in.

They were buying knives.


For the city is the murder capital of Britain and knives the weapon of choice despite the Cultural Renaissance during
the 1980s and 1990s when the city made serious attempts to reinvent itself with the Glasgow Miles Better campaign and the opening of the Burrell Collection, It also became the European City of Culture.


I once made an artwork based on this incident called
Getting ready for a Glasgow nite out”.

The gallery, not surprisingly, rejected it.

I bought this multi-purpose Eskimo chopping knife in Anchorage some years ago during a stopover to Japan.
It can be used for skinning animals, preparing vegetables and cutting meat.
Most of the time though it sits on my kitchen window ledge coming into use for chopping herbs.
Posted by Ann Shaw at 2:25 PM