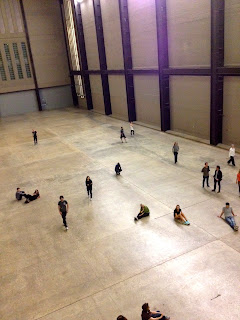 I am sitting on the floor of the Tate Turbine Hall, as you do, when strangers came up and told me highly personal stories about their lives:  the young Chinese man now a reformed liar, a Caribbean woman with recurring dreams of carrying a heavy load on her back up a steep hill and a Sri Lankan woman who could decide at 38 years of age whether to have children or not.

These are storytellers, part of Tino Sehgal’s installation. He says the work is about what it means to belong to a group.

One thing they had not expected is that members of the public would join in, not with the storytelling though I am sure there must have been some frustrated actors there who decided to join in too but with all the walking, running and sitting.

At one stage I too joined in. It was a theatrical experience, which at times bordered on the quasi-religious: dozens of people standing absolutely still chanting and singing with lights on and off.

Did it work? Yes. I forgot about the other exhibitions I had come to see and spent most of my time in the Turbine Hall and the Tank Rooms paying only a cursory glance at some of the other galleries.

For we have reached a stage in the visual world where seeing a work, however important in the canon of art no longer does it for us in the 21st century. We want more from it than the passive viewing of something hanging on the wall.

And this can only come about by the blurring of edges between all the arts, helped by the interface with technology: the artist and the viewer become inter-changeable, like the writer and the reader.

We want to engage with it, interact with it, to become part of it even if only for a few minutes and this you could do with Sehgal’s work.
This is the first time the Tate have used the Turbine Hall for live performance installation.
Hopefully we will see more in the future.

Although the event has some loose choreography, lights dim,singing and chanting at regular intervals, running, walking, it gives the impression of an organic whole: a mass of total strangers interacting and moving as one.

What the artist did not expect is that total strangers would join with the storytellers in walking around the floor of the Turbine hall.
This is interactive immersive collaborative art of the 21st century, reflecting the zeitgeist of our time.

Yet the piece also had a strange sense of deja vu.  I witnessed a similar scene over ten years ago while a student The School of the Art Institute in Chicago where art, technology and performance came together in one student performance.

Oh dear! a video I made of the storytellers has been deleted from Youtube - breach of copyright!
yet we were sharing stories.....
Posted by Ann Shaw at 3:30 PM