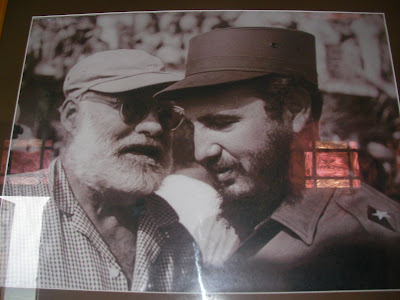 Photo: Hemingway and Castro in Cuba*

I was interested to receive from David Harding the book, which he wrote in collaboration with Ross Birrell and Douglas Gordon “You like this garden?”

It was a gift in return for my giving him a copy of PaolozziRevealed.

His work in Cuba brought back my own experience of the country.  On a brief visit I shot some video footage, which resulted in a couple of videos now up, on my YouTubechannel.

Only one am I pleased with -Guests from the Future-
but it has got the least hits on YouTube. Not sure what that tells you about (a) public taste) or (b) artistic merit.

More importantly though it reminded me of the time I worked with Cuban performance artist TaniaBruguera now an internationally acclaimed artist and political activist.

We were in the same class at the School of the Art Institute Chicago and she was in the throes of developing Burden of Guilt, an epic performance piece and she needed recordings of sheep. Well, I come from Wales and would be going home for Christmas so I did some recordings of sheep on the family farm. These were later used in her performance though after they had been manipulated in the sound studio I hardly recognized them!

There was one surreal morning in the School of the Art Institute when the building was filled with the sound of hundreds of sheep being moved from one field to another.  It brought folk scurrying out of their offices to find the source of the commotion.

These memories came flooding back yesterday after reading David’s book.

* I took this photo of a photograph in Ernest Hemingway's house in Havana.
Posted by Ann Shaw at 4:23 AM