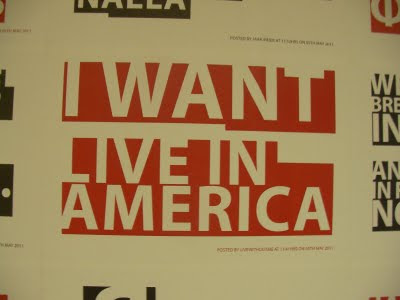 Tallinn Wall
Artists collect words and phrases from Facebook and Twitter and publish them as standard size posters on the gallery wall.So this becomes the physical manifestation of the invisible digital city all around us.

Just back. City was a big surprise. Had expected the medieval side but not that it had jumped straight into the 21st century.

Glad I had my ipad with me because if you wanted information on the European City of Cutlure you were referred straight to the web.

I saw some amazing stuff in Kumu, their new museum which is a cross between the Guggenheim in New York and the Jewish museum in Berlin. It looks terrific though it is not that user friendly inside.

The top floor was given over to "Click Here" and this was superb. Here we had cutting edge art where Man ( or should it be Woman) meet with computers to create a whole range of images and experiences that reveal a new world.

It was the immersive, interactive work that held peoples attention longest and opened up whole range of new art experiences.

bit.fall, Julius Popp's video installation turned water in words trawled from top news sites on the internet- as we walked in we got the London riots already turned into an art form.

The viewer is able to experience the digital world as an analogue sculptural installation.